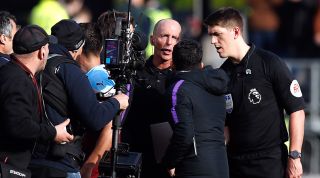 Mike Dean has been redirected from fourth official duties in Tottenham’s game at Chelsea on Wednesday to avoid any potential for further conflict with Spurs boss Mauricio Pochettino.

Dean will now be on the touchline at Manchester City vs West Ham instead of Stamford Bridge, with Kevin Friend taking his place.

Press Association Sport understands the move was made by the Professional Game Match Officlas Limited (PGMOL) to avoid a potential conflict if Pochettino is charged by the Football Association for his angry confrontation with Dean.

As the Spurs boss walked across the Turf Moor pitch following the 2-1 defeat by Burnley, which weakened Spurs’ Premier League title chances, Pochettino became engaged in a lengthy and heated exchange with Dean, who remained calm.

Pochettino’s Spanish assistant Jesus Perez jabbed his finger towards the face of Dean while the Argentinian was eventually led away by Burnley defender Phil Bardsley.

Pochettino did not reveal what was said or the reason for the strength of his feelings, with the only really contentious decision appearing to be the award of a corner that led to Chris Wood’s opening goal.

The outburst was out of character for Pochettino, who will not contest any disciplinary action, admitting he may have “crossed the line”.

“I will accept everything that can happen from the FA but I hope they won’t go any further,” he said.