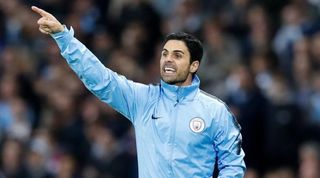 The Manchester City assistant manager is set to take charge at the Emirates Stadium ahead of this weekend's clash with Everton.

Arsenal are currently in 10th place in the Premier League table, seven points adrift of the top four.

And Merson believes Arteta's lack of managerial experience makes him the wrong man for such a tough job.

"This is a big, big gamble putting someone that has never managed before in charge of a club the size of Arsenal," the former Gunners midfielder told Sky Sports.

"It's all well and good saying he's worked under Pep Guardiola, but let's be honest, Guardiola would struggle managing this Arsenal team. Guardiola and Jurgen Klopp would struggle!

"You're only as good as your players at the end of the day and the idea of Arteta replicating Guardiola's style of football at the Emirates just falls apart when you look at the players he'll be working with.

"To ask someone with no managerial experience to take charge in the current circumstances at Arsenal is a big ask. But there are also massive question marks over his credentials, massive questions.

"One of the major factors with Arteta being linked with the job is that he's worked closely under Guardiola, and he used to play at Arsenal. Other than the fact he won't get lost on the way to training, I don't know what else he brings to the table.

"We've seen how out of his depth Freddie Ljungberg has been in recent weeks. What's the difference between Ljungberg and Arteta other than the fact Arteta has worked under Pep at Manchester City?

"It doesn't mean Arteta has earned his stripes or he's better qualified, and Arsenal won't suddenly start playing like City if Arteta is appointed because it's not as simple as that."

Even now, appointing Mikel Arteta as manage would be a major risk for Arsenal