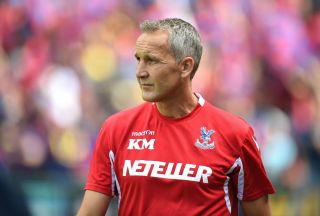 Managerless Palace conceded twice in the first half as Mauro Zarate and Stewart Downing put West Ham 2-0 ahead before Marouane Chamakh pulled a goal back early in the second period.

Carlton Cole sealed Palace's fate to end another turbulent week for the London club, who are still recovering from Tony Pulis' departure prior to the start of the season and saw sporting director Iain Moody resign for his part in the Malky Mackay text message scandal.

And Millen was left deflated after a frustrating performance.

"Certainly the first half was disappointing," said Palace's caretaker manager. "We never got going.

"We spoke about being at home and the expectations but we were flat. There was no tempo to our pressing, we allowed West Ham to control the game.

"We had a couple of chances to take the lead before they scored but in general we were lacklustre.

"It's been a tough week for the players. I've tried to play it down before, in training they've been fine but never sure how they respond.

"But I don't want to make excuse that was not good enough in the first half.

"We got a response in the second half and I thought we could get something out of it. But unfortunately we've conceded another goal from a set-piece that's killed the game."

Millen is expected to still be in charge for Palace's midweek League Cup clash with Walsall as the search for a new manager continues.