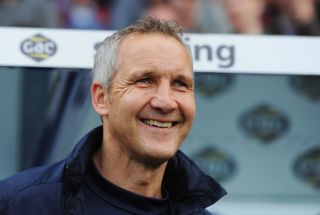 Millen took charge for the game after Ian Holloway parted company with the club by mutual contest on Wednesday following a run of one win from the opening eight Premier League games.

Palace produced a spirited display, but the Premier League leaders claimed all three points at Selhurst Park thanks to a second-half penalty from Mikel Arteta - who was later sent off for a foul on former Arsenal striker Marouane Chamakh - and a late header from Olivier Giroud.

Despite the loss, Millen was quick to credit his players for an improved performance.

"Today was all about getting a response from the players, and we got that and I think the fans appreciated it," he said.

"I was very proud to lead the players out, but it was more about them having pride in themselves.

"I honestly thought, at 1-0, we would get something out of the game. We spoke at half-time about starting the second half strongly, but unfortunately it did not happen, but I am very proud of the players, and I have told them such."

Millen stated that he would be happy to continue in his current interim position, but stressed that the new permanent manager must have the experience needed to keep Palace in the top flight.

"I believe the man who comes in needs to have the right level of experience at this level, and I don't know if I am that man yet," he added.

"For the time being, though, I am happy to keep charge because I enjoy the job so much, the team is terrific and they work so hard."