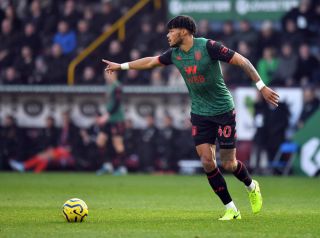 Tyrone Mings felt Aston Villa provided the perfect response to a poor run with a strong performance to beat Burnley at Turf Moor.

Villa arrived in Lancashire in the relegation zone and having lost five of their last six Premier League games, including 3-0 to 10-man Watford last time out.

But they dominated the first half, scoring goals through Wesley and Jack Grealish – who had another effort controversially ruled out by VAR – and held on for a 2-1 victory.

Defender Mings said: “We knew exactly what was required. It’s a stage of the season where results are massive but, judging by what we’ve delivered recently, performance was probably even bigger than the result.

Mings was back in the side for the first time in nearly a month after injury and produced an impressive display in a new-look back three alongside Ezri Konsa and Kortney Hause.

“Obviously it’s always frustrating to be on the sidelines and watch the team, especially if we’re losing,” he said.

“I really, really enjoyed being back out there and a thoroughly deserved three points I think.”

Villa only spent a couple of days preparing to play three at the back after manager Dean Smith decided to change formation.

Mings added: “I think one of the most important things that we can be as players is adaptable. Every game will be different, every game will require something different. I really enjoyed playing with the two centre-halves either side. It was a brave decision but I think we had the players to suit it.”

Villa’s victory was somewhat overshadowed by the latest VAR controversy, with Grealish’s header ruled out after a lengthy review determined Wesley had been marginally offside in the build-up.

Mings was magnanimous, saying: “It’s here so you’ve just got to deal with it. I don’t really like standing around but at the same time I think it does have a place in the game.

“Technology works in so many sports and it works well, we just need to nail how and when and what the best use for VAR is. At the moment I think it’s causing too many stoppages.”

Wesley did not initially celebrate his goal, with the lack of reaction from understandably-cautious Villa fans leading him to believe it had been disallowed.

“It’s not great for the entertainment, it’s not great for people watching or players that are involved in it because that’s such a huge high when you score a goal and you should celebrate it,” said Mings.

“But it’s just something we’ve got to deal with at the moment and, if you can’t celebrate for a few minutes, then so be it. Until the season concludes, I don’t think we’re going to see a change.”

Villa, meanwhile, were waiting for the results of scans to determine the severity of knee injuries suffered by Wesley and goalkeeper Tom Heaton.

The result was a blow to Burnley, who have now lost six of their last eight games and are being sucked towards the relegation zone.

Manager Sean Dyche said talks were ongoing regarding the future of Chelsea midfielder Danny Drinkwater, whose loan runs out on January 6.

It seems unlikely the Clarets will look to keep him given his lack of impact so far but Dyche is not optimistic about making any January signings.

“I think it’s unlikely, whether I need it or not,” he said.