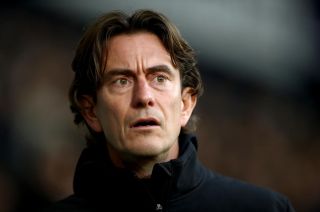 Brentford’s Thomas Frank admitted to a mixture of pride and annoyance after seeing his side fight back from two goals down to draw 2-2 against Blackburn.

Goals from Adam Armstrong put Frank’s side in the driving seat but the Bees hit back through Ollie Watkins and Said Benrahma to earn a precious point.

He said afterwards: “I’m annoyed we didn’t win but immensely proud of the boys for their attitude, the way they stayed together, kept going and worked hard to the end.

“In the end Blackburn looked so tired and that is a huge credit to our team. We have big togetherness even after going behind in the first half when we really should have been in front.”

He added: “Not everything was perfect but we produced enough chances to get a goal.

“Then after conceding a very debatable penalty for their second goal we were relentless, got closer to them and got our reward.”

By the end, Brentford had two attacking wing-backs and were ploughing forward in search of the winner, with Frank adding: “A lot of teams at 2-2 will say ‘let’s settle for the point’ but we always want to win, went for it and created two chances that would have won the game for us. That’s the way we are.”

Frank also revealed that skipper Pontus Jansson, whose presence has tightened up the Bees defence this season, suffered a setback in his return from a hip injury early last week.

However, he was upbeat about the list of replacements and hailed central midfielder Christian Norgaard for dropping into the back four in the closing stages against Blackburn.

Frank explained: “He is a ball player and we needed that near the end and it almost came off.”

The head coach warned Bees fans not to expect another big win when his side travel to Luton, who they beat 7-0 earlier in the season, next week.

He added: “That will be a very tough game.

“They are fighting relegation and will do all they can to make sure they don’t have another big defeat. But if we show the attitude we did today we will give ourselves a good chance.”

“Frustrated and disappointed” were Blackburn boss Tony Mowbray’s emotions after seeing his side let a two-goal lead slip.

It was tough on a well-drilled Rovers side that took control of the midfield for long spells at a windswept Griffin Park against a side Mowbray rates very highly.

He said: “For the majority of the game we managed them pretty well and we know what talented individuals they’ve got and how they can build pressure.

“We got to the point where the crowd were about to turn on them after a few misplaced passes and then a bit of magic from their centre forward changes things.”

Mowbray had doubts about the penalties awarded to both sides, one for Bees keeper David Raya’s push on John Buckley and the other for Lewis Travis’s trip on Mads Roerslev.

He said: “The officials had a tough day today. If we had VAR it might have been 1-1. We have frustration about their penalty – it looked ridiculously soft to me.

“That said, they are a very good football team well coached and a well-run club but for long spells we were on top, so we leave frustrated and disappointed.”

Mowbray was pleased with his side’s physical presence in west London despite a mounting injury crisis and added: “If you don’t battle when you come here you will get well beaten.

“Bradley Dack is a star player for our club and we have three key players out, so when you are dealing with injuries it’s like Brentford playing without their front three.”

Mowbray was delighted with the way his side have come through a tricky patch of games ahead of two home games at Ewood Park.

He said: “It’s a good chance to take six points if we can find way of winning, so at we will take a point because Brentford are a very good football team.”