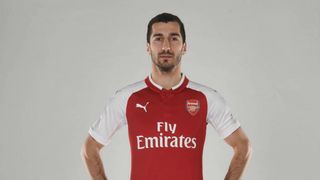 Mkhitaryan, 29, joined Arsenal earlier this month as part of a swap deal that saw Alexis Sanchez head to Manchester United.

The Armenia international made just 11 league starts at United this season before making the move to the Emirates Stadium.

"Of course it's very important to have respect from your manager. I know that he's demanding and he likes his players to explore," he told Arsenal Player of Wenger.

"He was one of the [reasons] to join Arsenal as well because everyone knows he's a great manager.

"I've known him for a long time and of course it was not very difficult to make this decision to come to Arsenal, because I think the way that Arsenal play [make] it a dream for every player to come here and play offensive football."

Mkhitaryan made a total of 63 appearances in all competitions for United, scoring 13 goals.

He could make his Arsenal debut when Wenger's men visit Swansea City in the Premier League on Tuesday.