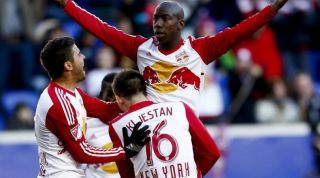 New York Red Bulls striker Bradley Wright-Phillips is hoping Sunday's historic derby is the start of something that can rival derbies across the globe.

The two sides are at different stages of their development, with Red Bulls third in the Eastern Conference after eight matches and bidding for another top-two finish, while New York City have gone seven matches without a win since accounting for New England Revolution on March 15.

There is "no bad blood" between the two New York teams just yet but Wright-Phillips expects that to change over the years.

"It's obviously a rivalry because we're in the same city but there's no bad blood yet. I'm sure after the first 90 minutes they'll hate us more," the Englishman told reporters.

"On a derby game day like Sunday, it just comes out naturally. Both teams, kind of the first 15 minutes, ignore the soccer side of the game and it's just a fight. I think whoever wins that battle will probably win the game.

"[The rivalry is] needed. I'm so happy they're in this league with us now. Every great league has great rivalries. Man City-Man United, Liverpool-Everton, all the big cities have those kinds of rivalries.

"For New York to have one, it's going to be really good. The old enemy, DC [United] that's a nice one, we actually have a history with them, but I'm sure this one will be big for years to come."

Toronto, who have won back-to-back league matches, entertain Houston Dynamo in the only other fixture on Sunday.

Eastern Conference-leading New England kick-off the round at Orlando City on Friday.

The Revolution top the standings ahead of DC United, who play host to Sporting Kansas City on Saturday, due to their superior goalscoring record and a seven-game undefeated streak.

On Saturday, Montreal Impact return to MLS action for the first time since losing the CONCACAF Champions League two-legged final when they welcome Portland Timbers to the Canadian city.

The Whitecaps are at home to Philadelphia Union, Seattle Sounders can make it four successive wins with victory over Columbus Crew, while Chicago Fire and Real Salt Lake go head-to-head.