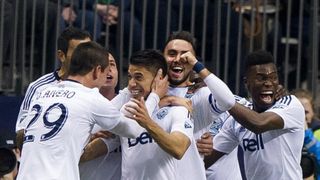 Vancouver Whitecaps will look to maintain their unbeaten run against regional rivals on Saturday in their top-of-the-West clash against Seattle Sounders.

Carl Robinson's Whitecaps have played local rivals in two of their past three matches in all competitions, notching draws against Portland Timbers in MLS at the start of the month and FC Edmonton in the Canadian Championship on Wednesday.

Vancouver will continue their run of local rivalry fixtures against the Sounders this weekend, as first take on third in the Western Conference.

It will be the Whitecaps' third straight match at BC Place Stadium and Robinson has challenged his players to rise to the occasion after a nervous 1-1 draw in their semi-final first leg against second-tier Edmonton.

"There shouldn't be [nerves] but with some I think it was," the Welsh coach said.

"They've got to get used to it, playing in front of our fans. We play in front of 20-odd thousand every week and against Portland and when we go on the road against Seattle.

The Whitecaps have not lost in three matches against fellow Canadian clubs or their rivals in the a - the regional trophy that Vancouver, Portland and Seattle compete for each year - although they started the 2015 MLS season with a loss to Toronto FC.

The clash against the Sounders will be followed by Wednesday's trip to Edmonton for the semi-final second leg.

The East's leaders - DC United - will complete the round's action with a trip to Philadelphia Union.

DC (21) leapfrogged New England Revolution (18) to the top of the standings with a 2-1 win over Orlando City on Wednesday, with Chris Rolfe notching the winner for the capital club - the veteran striker's third goal in five games.

"It's fun to watch him," DC coach Ben Olsen said.

"He glides around the field pretty effortlessly - when I talk about him, 'classy' keeps coming up. Smooth. He's a lethal finisher, great balance. He's got a bag of tricks."