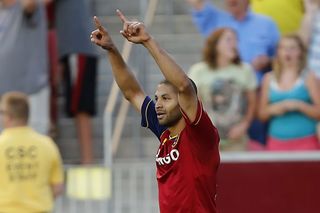 In their final regular-season game, Jason Kreis' men struck twice early in the second half at Rio Tinto Stadium before holding on to move above the Portland Timbers in the west.

The Timbers will finish top of the conference if they can win at Chivas USA on Saturday.

Real Salt Lake needed until the second half to open the scoring when they were awarded a penalty after Chivas defender Mario de Luna handled in the area.

Saborio stepped up to convert the spot-kick before his side doubled their lead just four minutes later.

Plata pounced on a loose ball just outside the area to curl a smart finish into the bottom corner with his left foot.

Morales, introduced in the 76th minute, needed just moments to have an impact off the bench.

He got in behind before taking a touch and poking his finish past Nick Rimando and into the bottom corner but the Timbers were unable to find an equaliser.

Chivas are winless in their past five games, including being hammered 5-1 by the Houston Dynamo and 5-0 by the Los Angeles Galaxy.