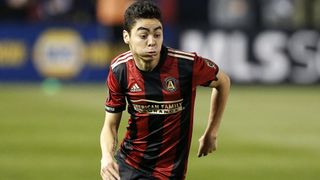 Atlanta United continued their good form in MLS with a win over New York City, while Dallas and Houston Dynamo drew.

A first-half brace from Miguel Almiron saw Atlanta claim a 3-1 victory against City at Bobby Dodd Stadium on Sunday.

The win was Atlanta's second in a row and stretched their unbeaten run to three, lifting them into seventh in the Eastern Conference.

Almiron fired in the opener in the 16th minute after Julian Gressel found him with a cutback.

Hector Villalba doubled the lead just three minutes later with a neat placed finish, before Almiron and Gressel combined again midway through the half.

Gressel again burst clear down the right before picking out Almiron, who applied the simple finish to make it 3-0.

The visitors, who are third in the table, pulled a goal back through Jack Harrison in the 71st minute.

In Texas, Dallas and Houston – third and second respectively in the Western Conference – played out a 0-0 draw.