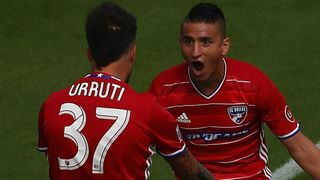 FC Dallas extended their lead atop the MLS Western Conference standings courtesy of a hard-fought 1-0 win over San Jose Earthquakes on Friday.

Maximiliano Urruti scored the only goal of the game in the early stages of the second half, an overhead kick, to seal the slender win at Avaya Stadium in San Jose.

The win helped Dallas move four points above second-placed Colorado Rapids in the west, albeit with an extra three games played.

In an even first half it was Anibal Godoy who came closest for hosts San Jose, but the Panama international's curling free-kick was cruelly denied by the crossbar.

A brilliant save from San Jose goalkeeper David Bingham then denied Mauro Diaz, but the deadlock was broken by his Argentinian compatriot in the 51st minute.

After the ball sat up perfectly in the air following a defensive block, Urruti scored a sensational overhead kick to open the scoring in front of a stunned crown.

The 25-year-old then almost doubled their advantage a minute later, but his shot from close range came off the outside of the post.

However Dallas managed to hold on for the win on the road, and their third straight victory in MLS.

Despite firing head coach Adrian Heath during the week, Orlando City failed to find a win after being held to a 0-0 by Houston Dynamo in the day's earlier fixture.

Heath was let go on Wednesday after Orlando had won just four of their opening 17 games, with the side sitting seventh in the Eastern Conference standings.

But after securing a point against Dynamo in a lacklustre affair, Orlando moved up to sixth in the table, while Houston moved off the bottom in the west.