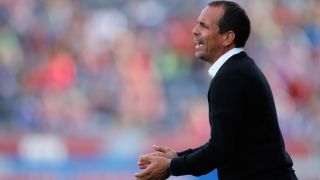 Dallas' unbeaten start to the MLS season was ended, while Houston Dynamo were thrashed on Saturday.

An 81st-minute goal from Jahmir Hyka saw the San Jose Earthquakes to a 1-0 win which marked Dallas' first defeat.

Hyka's goal was a stunner as he jumped to take a touch over a defender before calmly placing a finish in off the post.

Dallas' loss – the first Oscar Pareja's men have suffered through 10 games – left them third in a Western Conference which saw its top three teams beaten.

Second-placed Houston were no match for Miguel Almiron and Atlanta United, who recorded a 4-1 win.

Almiron opened the scoring for the hosts on the half-hour mark, taking a touch before unleashing a powerful left-footed effort past Joe Willis.

What a first touch and what a finish from Miguel Almirón! May 21, 2017

He doubled his and his team's tally before half-time, skipping into the area before making it 2-0.

Julian Gressel extended the lead in scrappy fashion before Almiron completed his hat-trick from the penalty spot.

Erick Torres scored a late penalty for Houston, whose second straight loss left them second in the table.

Sporting Kansas City remain top despite suffering a 2-0 loss away to Vancouver Whitecaps.

Chicago Fire continued their climb up the Eastern Conference table, extending their winning streak to three and moving into second after a 1-0 success at DC United.

Montreal Impact moved off the bottom with a 4-1 thrashing of a 10-man Portland Timbers, while Seattle Sounders edged Real Salt Lake 1-0.

Philadelphia Union stretched their winning run to four games with a 2-1 victory over the Colorado Rapids, who had a man sent off.