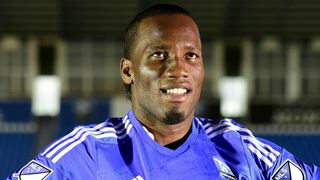 Former Chelsea striker Drogba netted the controversial 39th-minute opener at Stade Saputo in Montreal as the Impact consolidated the sixth and final play-off spot in the Eastern Conference.

Drogba, who bagged a hat-trick against the Fire just under three weeks ago and scored in last week's 3-0 win at home to New England Revolution, wrestled Jeff Larentowicz to the ground and headed past Fire goalkeeper Jon Busch six minutes before half-time.

The Fire - six points adrift at the bottom of the East following four consecutive defeats - drew level five minutes into the second half via David Accam, who bundled the ball over the line.

Montreal, however, were not to be denied a fifth straight game without defeat after Andres Romero tucked the ball beyond the onrushing Busch.

Impact defender Laurent Ciman, though, was sent off for a second bookable offence in the first minute of injury time, a blight on an otherwise perfect day for the home team.

The Impact are sixth in the East on 39 points from 28 matches with six rounds remaining, four points clear of Orlando City, while the cellar-dwelling Fire remain well off the pace.

Will Bruin's 67th-minute goal was enough for the Dynamo to snap a run of back-to-back defeats, despite Boniek Garcia's red card three minutes later in Houston.

The Dynamo are eighth in the Western Conference on 38 points, six points adrift of fifth-placed Sporting KC.