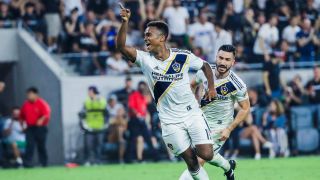 LA Galaxy have become the comeback specialists against Los Angeles FC after staging a dramatic rally to deny their city rivals in a 2-2 draw.

The Galaxy stunned LAFC in March's derby, overturning a two-goal deficit to earn an unlikely 4-3 victory thanks to Zlatan Ibrahimovic's late double on his debut for the MLS side.

And the Galaxy were at it again on Thursday, scoring twice in four minutes during the closing stages to silence the LAFC fans at Banc of California Stadium.

LAFC were in complete control inside 20 minutes thanks to goals from Mexico international Carlos Vela and forward Lee Nguyen, who caught the Galaxy off guard with a quickly taken free-kick.

The hosts continued to dominate but they were punished for not putting the game to bed as the Galaxy somehow salvaged a point.

The result extended the Galaxy's unbeaten streak to eight games, while LAFC remain second and four points ahead of their fourth-placed rivals in the Western Conference.

First-half goals from Maximiliano Moralez and Anton Tinnerholm saw NYCFC past Orlando, who had Shane O'Neill sent off with seven minutes remaining.

New York are a point adrift of leaders Atlanta United in the east, while Orlando are six points outside of the play-off spots.