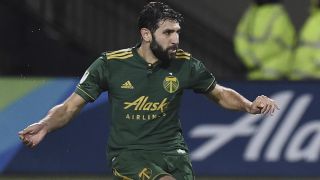 The Portland Timbers continued their winning streak in MLS, while Cristian Techera scored a hat-trick for the Vancouver Whitecaps on Saturday.

The Timbers extended their run to six straight wins thanks to a 3-2 victory over the Colorado Rapids.

Samuel Armenteros opened the scoring for Portland approaching the half-hour mark, finding the top corner after a brilliant turn.

But the Rapids found an immediate response, Julio Cascante turning a cross into his own net.

An Armenteros header restored the Timbers' lead before Diego Valeri made it 3-1 after a counter-attack.

Yannick Boli netted a late penalty for Colorado, but Portland closed out their win to move into third in the Western Conference.

In Vancouver, Techera struck a second-half hat-trick to help the Whitecaps draw 3-3 against the New England Revolution.

An Ali Ghazal own goal and Cristian Penilla strike had New England in control early in the second half.

But Techera dragged the hosts level with two goals in three minutes, finishing a Marcel de Jong cross before scrambling in a second.

Teal Bunbury restored the Revolution's lead in the 59th minute, only for Techera to put away a Yordy Reyna cross to make it 3-3.

A 10-man Los Angeles FC held on for a 1-1 draw at home to DC United to continue their solid start to the season.

Minnesota United scored twice in the second half to record a 2-0 win at home to the Montreal Impact.