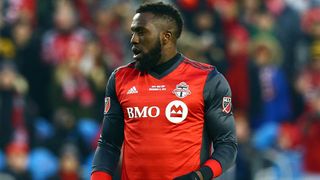 Toronto's MLS play-off hopes were ended on Saturday, while Atlanta United stayed on track to win the Supporters' Shield.

Already facing an uphill task to reach the play-offs, Toronto's chances were brought to an end with a 2-1 loss to the Vancouver Whitecaps.

The Whitecaps made an ideal start, Russell Teibert's brilliant low strike giving the visitors the lead in the fourth minute.

Toronto, the reigning MLS Cup champions, were reduced to 10 men in the 66th minute when Gregory van der Wiel picked up a second yellow card.

But they still found a response, Jozy Altidore converting from the penalty spot after a handball in the area.

However, parity lasted just five minutes, Kei Kamara tapping in a 78th-minute winner for the Whitecaps.

Atlanta United are still well-placed to win the Supporters' Shield after beating the New England Revolution 2-1.

George Bello and Julian Gressel were on the scoresheet for Gerardo Martino's men, who are a point clear atop the Eastern Conference.

The New York Red Bulls kept the pressure on Atlanta thanks to a 3-1 win over the San Jose Earthquakes.

Sporting Kansas City clinched their play-off spot after a 1-1 draw with the LA Galaxy.

Zlatan Ibrahimovic's 25th-minute penalty was cancelled out by Johnny Russell, leaving the Galaxy in seventh in the Western Conference.

Double take? Have another look at the back-to-back goals from Sebastian Blanco. October 7, 2018

Montreal Impact were too good for Columbus Crew 3-0, Los Angeles FC enjoyed a 3-0 win over the Colorado Rapids and Dallas beat Orlando City 2-0.