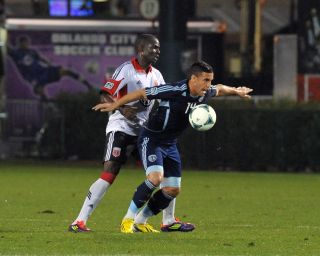 A seventh-minute goal from Dom Dwyer was all Kansas City needed at Sporting Park as they moved above the New York Red Bulls.

Fighting for top spot in the conference, New York face the Houston Dynamo on Saturday and need a win to reclaim first.

It was no surprise that DC United, who are bottom of the Eastern Conference, were behind after a shocking mistake inside seven minutes.

Perry Kitchen's attempted back pass to his goalkeeper lacked enough power and Dwyer was on hand to intercept, round Bill Hamid and tap in.

That was all Peter Vermes' men needed to move a step closer to the Supporters' Shield, awarded to the team with the best regular-season record.