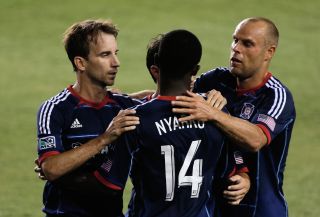 Yet another goal from Mike Magee helped the Fire overcome Toronto 1-0 to be fourth in the Eastern Conference.

Chicago's win came as the Portland Timbers maintained their one-point lead atop the Western Conference after a 0-0 draw at home to second-placed Real Salt Lake.

The Montreal Impact finally returned to winning ways in the league to move into third in the east with a 2-1 win at home to the Philadelphia Union.

Fabinho had put the Union, also chasing a play-off spot, ahead on 29 minutes before Montreal scored twice in the second half.

The Revolution also claimed a vital victory as they battled past the Columbus Crew with a 3-2 win at Gillette Stadium.

The Seattle Sounders' poor form continued and their play-off place is under threat after a 2-0 loss at Dallas.

Matt Hedges and Michel struck in the second half as Dallas condemned the Sounders to their fourth straight league loss.

Seattle are fifth in the Western Conference, four points ahead of San Jose with the Earthquakes holding a game in hand late in the season.

The Colorado Rapids jumped into fourth in the west as Gabriel Torres' brace led them to a 3-2 win over the Vancouver Whitecaps.