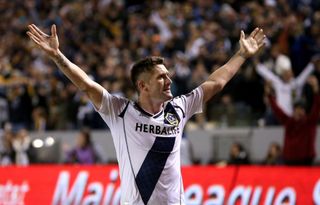 The Galaxy moved ahead of the Seattle Sounders with their convincing home triumph.

Republic of Ireland star Keane opened the scoring in the eighth minute with a sensational chip after Landon Donovan stormed through the New York defence.

Donovan starred throughout the contest and doubled the Galaxy's lead in the 50th minute.

The attacker caught New York defender Chris Duvall napping and stripped him of possession before side-footing past goalkeeper Luis Robles.

New York's night went from bad to worse when Gyasi Zardes fired a powerful effort into the bottom-left corner with 21 minutes to play.

And there was still time for Keane to score again as he tapped in after an initial effort was saved by Robles following an excellent dinked pass from Donovan.

And Oscar Garcia sealed the three points when he side-footed a volley in with 23 minutes left.