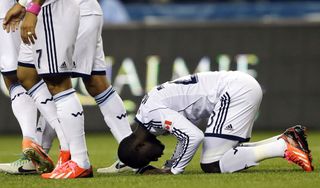 The Sounders are now winless in four, wasting a valuable chance to climb top of the Western Conference on Wednesday as Manneh ran wild at the CenturyLink Field in Seattle.

The Gambian 18-year-old opened his account for the night on 12 minutes, sliding a left-footed effort underneath the on-rushing Seattle goalkeeper Michael Gspurning.

Manneh doubled his tally just prior to half-time and completed a stunning hat-trick nine minutes after the interval when he was afforded too much space to poke home on his right foot, converting from Daigo Kobayashi's through ball.

The Whitecaps teenager became the youngest player to notch a hat-trick in the MLS, breaking Stern John's previous record.

John was 21 when he scored his first MLS hat-trick in 1998 for Columbus Crew.

Mauro Rosales pulled a goal back on 69 minutes for the Sounders but former West Ham and Aston Villa man Nigel Reo-Coker completed a gut-busting run from a turnover inside Seattle's own half for Vancouver's fourth.

Gspurning capped a poor night by allowing the ball to slip through his legs from Reo-Coker's mediocre strike, as Vancouver sealed a valuable three points.

The Whitecaps had moved into sixth spot in the West - three points behind the fifth-placed Colorado Rapids - but were bumped back down to seventh courtesy of San Jose Earthquakes' 1-0 victory at home to the Rapids.

Chris Wondolowski scored the winner on 69 minutes, powering home his 10th goal of the season with a strong header from a Shea Salinas corner.

The Earthquakes' victory took them within one point of the play-off-placed Rapids in the West, with both sides having two matches left in the regular season.

A battle between second and third in the Eastern Conference, Sporting Kansas City's visit to Houston Dynamo ended in a deflating scoreless stalemate.