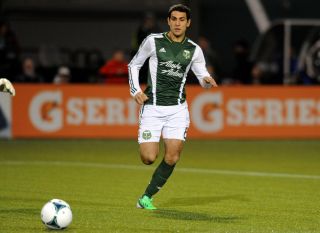 In their final game before the MLS playoffs, Portland scored three times in the first half to effectively end the contest by the break, while Ryan Johnson and Will Johnson scored within five minutes of each other in the second stanza to wrap up the rout.

The victory took the Timbers a point ahead of Real Salt Lake at the top of the Western Conference standings with 57 points, while third-placed Los Angeles Galaxy (52 points) cannot overhaul Portland as they have only one game left in the regular season.

The Western Conference championship is Portland's first major title since they joined the MLS in 2011, while they will also compete in the playoffs for the first time this season.

Diego Valeri was the star of Portland's first-half blitz on Saturday as he scored the opening two goals and set up Rodney Wallace for the third.

The Argentine midfielder opened the scoring in the 16th minute, slotting home from just inside the penalty area after Wallace's effort was blocked by Chivas goalkeeper Timothy Melia.

Valeri's second goal was a sublime chip from outside the box just before the half-hour mark, which looped over Melia and into the top left corner of Chivas' net.

Just five minutes later and Valeri chased down a long ball into the right channel before squaring a pass to Wallace, who finished first time to make it 3-0.

It was 4-0 with 18 minutes remaining when Ryan Johnson tapped home after Melia saved Wallace's initial shot, while Will Johnson's direct free-kick in the 76th minute completed Portland's triumph in front of the vocal travelling Timbers fans.

In the East, Sporting Kansas City ensured the New York Red Bulls must win their final game of the regular season to claim the Conference title.

Lawrence Olum notched his maiden MLS goal to give Sporting a 2-1 win away to Philadelphia Union, with the Kenyan defender slotting home from a cut-back by Teal Bunbury in the first minute of second-half stoppage time.

The victory took Sporting to 58 points and top of the Eastern Conference, while the second-placed Red Bulls (56 points), who face Chicago Fire on Sunday, must win to regain first position and clinch the title in the East.

In Toronto, Robert Earnshaw gave the home side a 1-0 win over Montreal Impact with a 16th-minute strike, ensuring the visitors suffered their seventh loss in 10 games in all competitions, while the San Jose Earthquakes defeated FC Dallas 2-1.