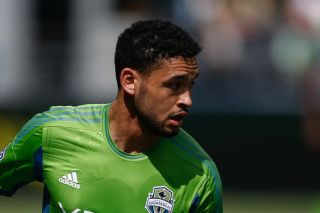 Donovan - who has played 10 years with the Galaxy and will retire at the end of the 2014 campaign - played his final regular season match at home on Sunday but did not emerge a winner after Seattle's late fight back.

Clint Dempsey and Lamar Neagle each scored in the space of three second-half minutes to secure a draw for the visiting Sounders, as they struck a significant blow in the battle for the Supporters' Shield.

Seattle lead the Supporters' Shield standings - for the best regular season record - on games won, as they sit level on 61 points with LA, ahead of next week's return match between the same two clubs.

Due to a quirk of the fixture, Seattle and LA will finish the regular season with two games against each other, and the Sounders know they can wrap up the Supporters' Shield by not losing, while the Galaxy need four points out of the two matches.

Sunday's result means Saturday's fixture in Seattle will essentially be a winner-takes-all encounter, with the home side having a slight advantage, as they can also claim the Supporters' Shield for the first time with a draw.

LA started brightly on home soil and the man of the moment - Donovan - almost opened the scoring in the 10th minute, looping a header from Dan Gargan's cross onto the bar from the tightest of angles.

But as the first half wore on, Seattle took control with Obafemi Martins and Dempsey both testing Galaxy goalkeeper Jaime Penedo.

Just four minutes after the break and it was 2-0 with Marcelo scoring from just inside the area, and LA looked to be cruising.

But again, Seattle worked their way back into the contest, eventually getting on the scoreboard in the 69th minute when DeAndre Yedlin skipped past Donovan and his cross flicked off Martins to Dempsey, who thrashed the ball home from 10 yards.

Neagle equalised in the 72nd minute, bursting onto Martins' through-ball and smashing home past Penedo.

Seattle had the best chances to score a third in the closing stages but could not find a winner which would have clinched the Supporters' Shield, while the Galaxy finished the match with one less player after Omar Gonzalez received a second yellow card in the 88th minute.

In the other match on Sunday, Columbus Crew defeated New York Red Bulls 3-1 with Aaron Schoenfeld scoring a brace for the victors.

The win saw the Crew (49 points) move above New York (47) into fourth in the Eastern Conference.