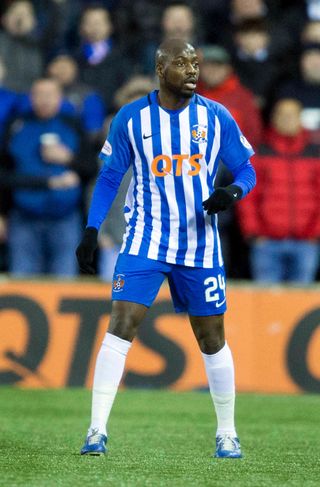 Kilmarnock midfielder Mohamed El Makrini has flown to Norway for talks on a move which pave the way for Youssouf Mulumbu to complete his Rugby Park return.

El Makrini has failed to make an appearance for Alex Dyer’s team this season and is now discussing a switch to IK Start.

A regular last season under former boss Angelo Alessio. he he has found chances limited since Dyer took over.

And with the Englishman’s budget spent, former Rodo man El Makrini will have to depart before Mulumbu can sign on again.

The Congo international has not played since his second spell in Ayrshire came to an end a year ago but has been training with his old side this week.

However, Dyer admits it is unlikely the former West Brom ace will be involved when his side welcome Dundee United on Saturday.

Dyer told the PA news agency: “Youssouf is still in training with us. I’ll have a chat with him over the next couple of days and see what he is thinking.

“He’s not played for a while but a player of that ability never loses it so I’m sure we could get him ready to play even a bit part soon enough if we needed to.

“He’s the type of character we could use around here. He’s a great person and since he walked back in for training this week it’s been like he’s never been away.

“Could he play against United? I’m not sure about that. It still depends on a few things.

“Mohamed El Makrini has gone over to Norway to have a look. We have to wait back and see what happens with that one. If he decides to go that could allow us to do something with Youssouf. If not then we still have a player who played a big part for us last season.”

Dyer could do with beefing up his midfield options after Irishman Alan Power damaged a hamstring during last week’s defeat at Rangers.

“We sent Alan for a scan on his hamstring this week and he will be out for a few weeks,” said the Killie boss. “It’s a blow because he is a big part of what we’re about.

“Thankfully we’ve got the international break coming up after the United game so that will eat up a couple of weeks and hopefully we can get him back training after that.”