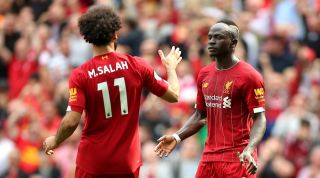 Alex Oxlade-Chamberlain has joked that Mohamed Salah is “selfish”, while also acknowledging that he is frequently a match-winner for Liverpool.

The Egypt international was criticised in last month’s 3-0 victory over Burnley for shooting instead of passing to Sadio Mane.

Mane was visibly angry at Salah’s decision to pull the trigger, and could be seen complaining to team-mates James Milner and Roberto Firmino following his substitution shortly after the incident.

The former Southampton forward has since explained that he and Salah have made up, dismissing the episode as something that can happen in football.

And Oxlade-Chamberlain says he is happy for Salah to keep taking shots as long as he maintains his excellent scoring record.

“Isn't selfish?" the England international replied to BBC Sport after being asked to finish the sentence ‘Mohamed Salah isn’t selfish because…’

"Are you winding me up? The guy doesn't pass to us. Are you mad? Ask Sadio!

“No, Mo Salah isn’t selfish because he’s a goalscorer," he continued. "He’s got to do that. We can’t expect him to pass us the ball all the time and him to score loads of goals.

He was the division’s outright leading goal-getter the previous year, scoring 32 goals in 36 appearances.

The ex-Roma forward has notched four goals so far this season, as well as providing two assists in the top flight.

Liverpool will be looking to maintain their 100 per cent winning start to the campaign when they travel to Chelsea – one of Salah’s former clubs – on Sunday.