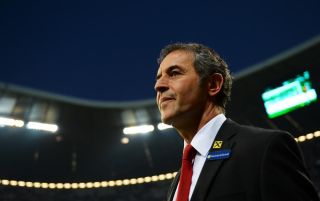 Koller's men took all three points from their trip to Chisinau, after captain Marc Janko scored what turned out to be the winner early in the second half.

The Sydney FC man turned villain in the final 10 minutes, earning a straight red card, and Koller said the dismissal - plus a pesky performance from the hosts - made it a hard-earned three points for Austria.

"This was a hard game for us," Koller said, as reported by UEFA.com.

"We had only one aim - to win - and every player did his best on the pitch for the victory.

"We were aggressive in attack and created more chances than our opponents. In the end, two goals were enough to win."

Koller said his defence did not entirely quell the Moldovans, and conceded his men were lucky to escape with victory.

"At the same time, Moldova also had chances. Especially during the final minutes, after we lost a player because he was sent off," he said.

"The home team were very active in this period, but it all ended fortunately for us. We got a victory and this is the main thing for me, also for the whole Austrian team."

Moldova are the only nation without a point through two matches in Group G, but coach Alexandru Curteian said there was plenty of upside for the European minnows.

"Our team has big potential and the main task now is to create a cohesive unit," Curteian said.

"We have very ambitious players and that is very good. I enjoy working with players like this a lot.

"I am very glad that they realise my ideas on the pitch."