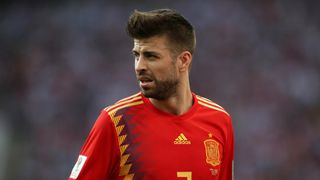 Pique previously indicated the 2018 World Cup would be his last tournament for Spain, who lost in the last 16 to hosts Russia on penalties.

"There are people who think it's better if I'm not here," said Pique, who is often jeered by Spain supporters due to his political views.

Pique is yet to confirm his definitive plans but Molina, who played for Spain as a goalkeeper, is hopeful the centre-back can be persuaded to stay on under new coach Luis Enrique, who he won the treble with at Barca in 2014-15.

"He is an extraordinary player and I would like him to continue with the national team," Molina said.

"But that is what the coach decides, I would like no Spanish player to resign from the national team."

RFEF president Luis Rubiales also believes Pique should reconsider his decision to walk away from the national team.

"For a Spanish player there is nothing as big as wearing the shirt of the national team," Rubiales said.

"I hope everyone wants to come, unless it is due to age. We do things for the best of the national team."