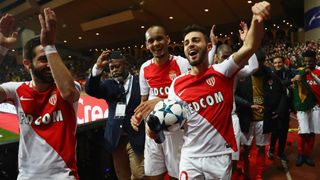 Monaco all but sealed the Ligue 1 title as Radamel Falcao scored twice to give them an impressive 4-0 home victory over Lille.

Paris Saint-Germain's 5-0 win over Saint-Etienne means Leonardo Jardim's side have not officially been crowned champions, but the leaders are three points clear with a game in hand and have a goal difference which is greater by 17.

Monaco face Saint-Etienne on Wednesday knowing a draw will formally give them the title, but this win has in effect sealed Ligue 1 glory and the club's first title since the 1999-00 season as PSG have only one game remaining.

Falcao headed in early on and Bernardo Silva's strike just before half-time was Monaco's 100th goal in their remarkable league season.

A rampant Falcao struck again in the second half to move onto 21 top-flight goals this season and ensure his side have won 10 straight league games - a run that has proven decisive in their bid for glory - with Junior Alonso's own goal putting the icing on the cake.

Jardim made two changes to Monaco's side and it was one of the players brought in, Thomas Lemar, who created the opener after six minutes.

Lemar whipped in a first-time cross from the left and Falcao was somehow left unmarked to plant home a simple header from six yards.

Lille tried to respond when Naim Sliti latched on to Eder's flick on and saw his shot saved by Danijel Subasic and the Tunisia international later tested the home goalkeeper again with a powerful drive.

Monaco should have gone two goals up when stretching defender Jemerson only managed to send Silva's inswinging cross over the crossbar.

But Monaco did extend their lead in first-half stoppage time, Silva producing a simple finish after superb work from Kylian Mbappe, who tormented defender Franck Beria with a twisting run and laid it on a plate for his team-mate.

Jemerson sent a blistering volley just wide just after the break while Subasic had to tip over from Youssouf Kone's cross-shot at the other end.

Monaco made sure of the points with a superb team move after 69 minutes, Mbappe's volleyed pass from the right being expertly converted by Falcao's first-time, left-footed finish.

Djibril Sidibe dragged wide from a great late chance given to him by Silva's superb pass, while Subasic made a superb save to keep out a free-kick from Lille's Fares Bahlouli.

By that point Monaco supporters were already singing in celebration of their now inevitable title success after giving substituted star of the show Falcao a standing ovation.

But there was still time for a fourth from the hosts with one minute left, Lemar racing clear down the left and crossing towards substitute Valere Germain, only for Alonso to divert the ball past his own goalkeeper in attempting to clear.