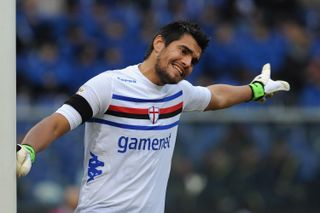 The Argentina international goalkeeper joins initially on a temporary basis for the 2013-14 season, with Monaco retaining the option to make the deal permanent.

Romero has spent the last two years playing for the Serie A side, and counts Argentine outfit Racing Club and Eredivisie side AZ among his previous employers.

Monaco have been busy adding to their squad during the transfer window, as they prepare for their first top-flight campaign since suffering relegation in 2011.

Claudio Ranieri's side began their league campaign with a 2-0 win away to Bordeaux on August 10.

Romero could make his competitive bow when Monaco welcome Montpellier to the Stade Louis II on Sunday.