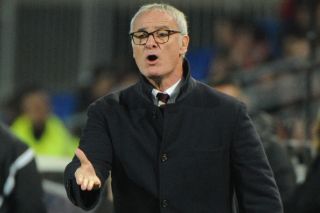 Layvin Kurzawa had given the Ligue 1 title contenders a 52nd-minute lead but M'Baye Niang helped Montpellier clinch a surprise draw as he tucked away a rebound after his penalty was saved at the Stade de la Mosson.

Ranieri believes his team controlled the game away from home but lamented squandering chances as they missed an opportunity to go level on points with league leaders Paris Saint-Germain.

"I think we have dropped about five points that we should not have lost in the last few games but that is football sometimes," the Italian said.

"I felt that we controlled the game, we had good chances to score but we couldn't and that is football.

"Now it's important for us to think about getting a positive result in the next game."

Ranieri was forgiving of his players in their first league game of the year, praising relegation-threatened Montpellier for continuing to push his team.

"I was expecting more from my players tonight. However, it's normal to see them off the pace because after the break you have to get the fitness back again," he said.

"We scored and I hoped to win the game but it was not possible because Montpellier forced the issue well. They tried to do something in attack and they got the penalty kick which they scored."