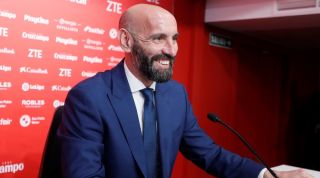 Wenger left the north London club at the end of the 2017/18 campaign after 22 years in charge of the Gunners.

During that time he won three Premier League titles, including an unbeaten league season with his ‘Invincibles’ side of 2003/04, and seven FA Cups.

However, Wenger came under increasing pressure towards the end of his tenure as the club struggled to compete for silverware and failed to reach the Champions League in his final two seasons.

Monchi made a name for himself for his work as a director of football, which was integral to making Sevilla a major European power as they won three consecutive Europa League titles between 2013 and 2016.

He returned to the Liga club earlier this year after a less successful spell at Roma, and pointed to Arsenal as an example that results don’t always reflect behind-the-scenes work in a long interview with El Confidencial.

“Of course, football’s problem is that everything is based on results,” he said.

“But there are projects that consolidate their future in the present with good selling policies, talent retention, academies.

“Sometimes they only get the attention when they get results, but they aren’t valued in the moment.

“The example of Arsenal is a very good one. They are a pioneer club that invested in data, bought their own ‘app’ five or six years ago and are developing it.”

Under new boss Unai Emery, Arsenal finished fifth in the Premier League last season and were runners-up in the Europa League, losing to Chelsea in the final.

The Gunners are currently third in the standings and in the midst of an eight-match unbeaten run in all competitions.