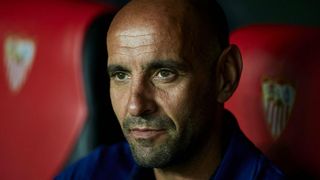 Outgoing Sevilla sporting director Monchi has announced he expects to link up with Roma at the end of the season, but has denied planning to appoint Unai Emery as the Serie A side's new coach.

The former goalkeeper has been in the role since 2000 for the LaLiga outfit, but he is to leave after spending 29 years as a player and then director at the club.

Monchi has been widely linked with Roma and confirmed that is his likeliest destination, although no deal has yet been agreed.

"It is not closed but it is what is closest," Monchi told AS. "If everything goes by the normal channel and nothing is twisted I will be in Rome, but I never see it closed until I see it signed.

"Marcelo came on a plane to sign for Sevilla and got off in Madrid. That's why I do not want the bells to ring until everything is tied up.

"No person of stature from any Spanish club has called me. There are brokers from several big clubs who have expressed interest in me, but I consider this opportunism: if they were major clubs, they would have called me directly.

"It is also true that if I have always said that I would not work for any other Spanish club that was not Sevilla, it is more difficult to be called. And I will never work in Spain anywhere other than Seville."

The last photo... Your colleagues will never forget you. Thank you for everything . We'll keep roaring! April 19, 2017

Paris Saint-Germain coach Emery has been linked with a switch to Roma at the end of the season, having won three consecutive Europa League titles under Monchi at Sevilla, but the sporting director played down the reports.

"I have talked to him lately but there is nothing about our future together in the medium or long-term," Monchi added.

"I want him to continue many years at PSG because it will mean that he is doing very well.

"He was the ideal coach for Sevilla and we did not do anything wrong in the three years."