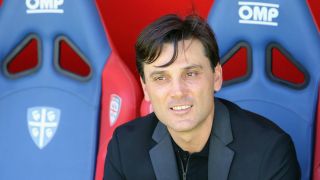 Vincenzo Montella has signed a new contract with AC Milan after leading the Serie A club back into Europe.

Montella agreed a two-year deal running to 2019 in a Facebook Live event streamed by Milan on Tuesday.

The former Italy international saw Milan to a sixth-place finish in Serie A this season, earning a place in the qualifying rounds for the Europa League, despite winning only one of their last seven league games.

But Montella has been given the chance to oversee the new era at San Siro, with centre-back Mateo Musacchio already snapped up from Valencia on a four-year deal for a fee reported to be around €18million.

Milan picked out European qualification, a late equaliser against rivals Inter and a win against Bologna with nine men among the reasons Montella has been handed a new deal.

"After a positive season managing a great group, the club and Vincenzo Montella are ready to continue working together, renewing the contract of the Rossoneri manager," the club statement read.