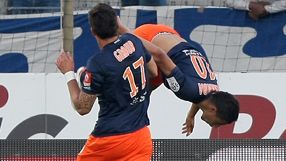 Marseille have now gone 13 league matches without a victory, their worst sequence since they went 15 games without a win in 1962.

Belhanda struck after three minutes when he fired the ball past keeper Ali Ahamada from outside the box.

Olivier Giroud, the league's top scorer with 20 goals, then missed a penalty for the visitors in the 58th minute.

"We produced a beautiful performance tonight even if we could have secured victory earlier," Giroud told the Foot+ television channel.

"This win is worth its weight in gold because all the pressure is now on PSG."

The one downside for Montpellier was that they missed a host of chances against seventh-placed Toulouse.

Liverpool manager Kenny Dalglish watched from the stands as Morocco playmaker Belhanda, one of the players of the season in Ligue 1, shone once again.

Giroud followed up his penalty miss by wasting another chance five minutes later after a pass from John Utaka set him up for a one-on-one with keeper Ahamada.

At Lorient, Arnold Mvuemba put the hosts ahead with a 41st-minute penalty after full-back Jeremy Morel fouled Joel Campbell.

Kevin Monnet-Paquet converted a Campbell pass after 53 minutes to double the lead before Mathieu Valbuena pulled one back for Marseille from Loic Remy's 77th-minute cross.

Lorient rose to 12th on 38 points, five clear of the relegation zone. Marseille are 10th on 41.