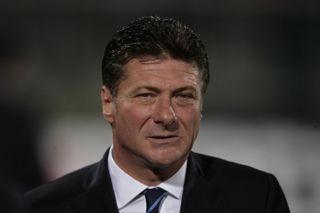 The former Napoli manager arrived in Milan in May and has gone about reorganising the squad after last season's disappointing league finish under Andrea Stramaccioni.

Inter finished ninth in Serie A last year and one of the criteria given to the 51-year-old was to revitalise their fortunes.

Moratti has backed his new manager with funds - they have made 13 new signings - and is delighted with the start to Mazzarri's tenure.

"He works as hard as any player out on the pitch and he's got talent to boot," the 68-year-old told the club's official website.

"He's a hard worker who knows exactly what he's doing and how to deal with the players and everyone else at the club."

Morratti also hailed the new man's approach in the transfer market, which has seen a number of younger players arrive.

"Players who, though young, are already clearly talented and with the potential to grow even further," he added. "And I think we got it right.

"But when you decide to adopt a policy like that you also need a coach who knows how to make the most out of it.

“For any team that wants to win things it's crucial to have a solid defence. That's something I learnt as a boy when I watched the Inter of old and it's always been the way.

“Whenever Inter have won the Scudetto, the team has always been built on a defence that worked well together. And our defence is starting to work well again now.”

Inter have won both of their opening league fixtures and have yet to concede a goal.