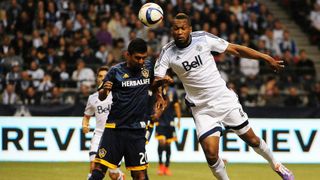 VANCOUVER – You could be forgiven for thinking that the Vancouver Whitecaps have been singled out by the MLS Disciplinary Committee this season.

As the Blue and White prepare to host LA Galaxy in an important Western Conference showdown this weekend, the Whitecaps were informed on Thursday that striker Masato Kudo would miss Saturday night’s game through suspension. The Japanese import was handed a one-match ban for simulation/embellishment after falling over in the Houston Dynamo box and drawing the decisive first-half penalty in last weekend’s 1-0 victory at BC Place.

Kudo follows teammates Christian Bolanos and Kianz Froese in receiving retroactive punishment from the MLS Disciplinary Committee this season, even though video evidence does appear to show that Kudo made contact with Dynamo right back Jalil Anibaba in the visitors’ box, as he tried to get on the end of Kekuta Manneh’s far-post cross near the Houston byline.

“It is what it is,” Whitecaps head coach Carl Robinson said of Kudo’s suspension. “There was contact in the play, but they adjudged that there was not enough contact to go over (in the box) and they made the decision to ban him. I respect that decision.

With Kudo suspended, Robinson may opt for the attack formation he used in the 2-1 victory at Cascadia Cup rival Seattle Sounders FC on March 19, as Blas Perez and Octavio Rivero led the line in a 4-4-2 formation.

Bolanos, Perez, and centre backs Tim Parker and Kendall Waston are all available this weekend after successfully coming through the past week unscathed while on international duty with their countries.

Perez helped Panama earn four points from their two World Cup qualifying games versus Haiti, while Bolanos and Waston helped Costa Rica stay top of CONCACAF Group B after claiming four points in their home-and-home set of World Cup qualifiers versus Jamaica. Parker’s dreams of going to this summer’s Rio Olympics were dashed, as the United States U-23 squad fell 3-2 on aggregate to their U-23 counterparts from Colombia.

Happy to be back in Vancouver, Waston expects to see action against the Galaxy, despite the short turnaround from his latest stint with Los Ticos. “I’m going to rest when I die,” the defender said jokingly at Whitecaps training on Thursday. “Now, I just want to recover well and, hopefully on Saturday, I could be 100 percent, if I have to play.”

While Vancouver is close to full strength for Saturday’s clash, the Galaxy will travel to Canada’s west coast without two of its big-name stars in Steven Gerrard and Robbie Keane. Gerrard is sidelined with a calf injury, while Keane underwent orthoscopic surgery on his right knee on Thursday afternoon and is expected to be out for four to six weeks. One player that may make the trip is Giovani dos Santos. The Mexican international returned to full training with Bruce Arena’s squad this week after overcoming an issue in his left leg.

Even without LA’s big names in attendance, Whitecaps goalkeeper David Ousted still believes the Southern California outfit have more than enough quality to give the Whitecaps a stern test on Saturday.

“I think LA has got depth like we do and the style of football they play poses a threat, so we’ve got to be at 100 percent,” he said.