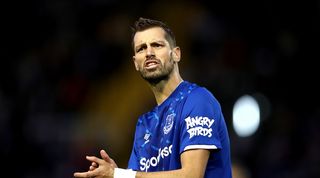 Everton midfielder Morgan Schneiderlin has admitted that he may have left Manchester United too soon.

The Frenchman moved to Old Trafford from Southampton in summer 2015, but departed 18 months later after making 32 Premier League appearances for the Red Devils.

And although Schneiderlin was not always an automatic starter for United, he believes he should have remained more patient for opportunities.

"I wanted to do more and I had the capacity to do more," he told BBC Sport.

"Maybe I jumped out of the boat too quickly when I didn't play for three months. When I look at other players having a great career at Manchester United, they all had a spell of four or five months when they didn't play.”

Schneiderlin was criticised by some United fans for being too negative in his use of the ball.

It also took the midfielder time to win over Everton supporters, but he has defended his style of play ahead of the Toffees' meeting with Brighton on Saturday.

“That's the perception of people and what they say but I would love to watch a game with them," he aded.

"If you are in midfield, you are 1-0 down and your team has run after the ball for a minute and I try a long pass and miss it, people might clap because it is an attacking move, but my team-mates might have to for another two minutes to get the ball back. If we are winning 1-0 and I make a short pass that allows the team to breathe, people think it is clever.

"Football is about perception. You can play the same game but it will be analysed differently depending on whether you have won or lost."