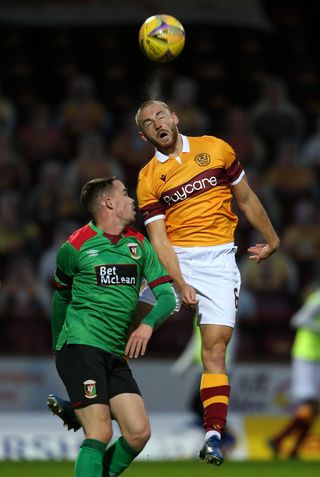 Allan Campbell netted his second winner of the week as Motherwell got their first three points of the Scottish Premiership season with a 1-0 victory over St Johnstone.

Campbell bagged the only goal in Scotland Under-21s’ victory against Lithuania on Tuesday and he took less than four minutes to score at Fir Park.

The midfielder turned away from two Saints players towards goal and fired into the bottom corner from 25 yards.

It was only Motherwell’s third goal of the league season, and Campbell’s second, but it failed to kick-start their performance and the visitors missed a number of chances to level.

But the strike proved enough to lift the bottom side level on five points with Kilmarnock and Livingston and give them a boost ahead of Thursday’s Europa League trip to Coleraine.

After conceding, Saints pressed their opponents well and kept much of the play in the home half, and they forced some near costly errors from the hosts.

Nathan McGinley, back from the groin injury he suffered on the opening day of the season, dallied on the ball and put Ricki Lamie under pressure and the defender was short with a pass back, but Trevor Carson saved from Michael O’Halloran.

Bevis Mugabi then gifted Saints a free-kick and the home side could only half-clear Craig Conway’s delivery, but David Wotherspoon could not make the most of the space, chipping the ball into Carson’s hands.

Saints carved out a final first-half chance when Danny McNamara’s cross found Callum Hendry unmarked but the swirling ball was inches too high for the striker, who headed off target.

Saints started the second half on the front foot. Hendry saw a shot deflected wide before Jason Kerr headed just past from Conway’s corner.

Mugabi sent a free header wide at the other end before Saints manager Callum Davidson changed formation 19 minutes into the second half.

Davidson had already brought on Chris Kane and Stevie May for fresh legs up front and he introduced midfielder Liam Craig for Liam Gordon, one of three centre-backs.

May had a glorious chance to level 60 seconds later following Lamie’s mistake but the striker scuffed his shot just beyond the far post.

Motherwell also switched to a 4-4-2 as Liam Grimshaw came on in midfield before Wotherspoon missed another chance when he was off target with a free header at the back post.

Home substitute Jordan White threatened from a couple of half-chances before going off with a head knock and Carson saved from Conway during 10 minutes of stoppage-time to seal the win.