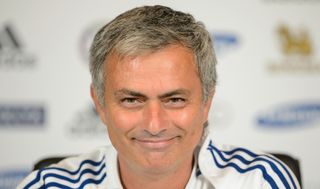 The Special-cum-Happy One returned to West London in June after six trophy-laden years away in which he has won the Serie A and La Liga titles, Italian and Spanish cups and Champions League for a second time.

Despite his overwhelming success, the fact the Portuguese has spent little more than three years at each of his previous three clubs allegedly ruled him out of the running for the Manchester United job this summer.

David Moyes, who had been in charge of Everton for more than a decade, was instead the preferred candidate to succeed Sir Alex Ferguson at Old Trafford.

But the 50-year-old has hit back. Speaking exclusively in the November 2013 issue of FourFourTwo – out now – he says he is now back in the country and league he cherishes the most and has a long-term strategy to reach the top of it once again.

Wheras Mourinho’s first Blues spell heralded a mass spending spree that brought two Premier League crowns, this time Jose has a squad brimming with young attacking talent at his disposal and he is relishing the role of developing it.

"I have been from club to club and country to country, so I am in a position to make that decision. I want to be at a club I like very much. I want to prepare the future of this club with a very talented squad."

And the two-time European champion rejects the idea that he has planned purely for the short term in the past, citing how his former clubs have continued on the same path with the same players long after he had exited.

“You see the Chelsea team that played for the last eight years. I was only here for three and a half of them, but for eight years, it was my team,” he says.

“The team that won the three championships [in 2005, 2006 and 2010] was the same. Look at Real Madrid this year. If you change Mesut Ozil for Gareth Bale, the team is the same. The Inter team was the same for two years after me.”

The must-read, in-depth interview with Jose Mourinho is in the November 2013 issue of FourFourTwo, which also features an exclusive chat with Marouane Fellani. We grill Dutch legend Ronald Koeman and hear what the world's former most expensive players had to say about their big-money moves. Subscribe, in print or for iPad, now.