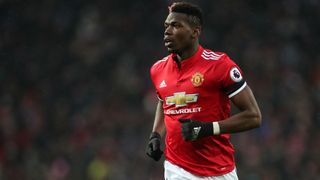 Jose Mourinho insists he was not trying to "punish" Paul Pogba by dropping him for the 2-0 win over Huddersfield Town on Saturday, lauding the Frenchman's "great attitude" as he came off the bench.

Pogba had been withdrawn in the second half of United's 2-0 loss at Tottenham on Wednesday, with Mourinho substituting him shortly after the pair engaged in a heated discussion on the touchline.

The midfielder was then left out of United's starting XI for Huddersfield's visit, sparking suggestions that Pogba was in Mourinho's bad books.

But the coach insisted that is not the case, before going on to praise Pogba's replacement Scott McTominay.

Speaking in his post-match news conference, Mourinho said: "I changed a few players and the intention was not to punish anyone, because to punish anyone I also need someone to punish me, because we are a team and when we win we win together, and we lose together.

"But I made a few changes thinking about the characteristics of this game and I think this kid [McTominay] has a great desire to recover the ball when the team is not in possession.

FT: 2 Huddersfield 0.Second-half goals from and secure a deserved victory for the Reds. February 3, 2018

"He's a kid that chases the ball, that tries to recover high up the pitch and when he has the ball it is always simple, and against opponents like Huddersfield, so close and with so many bodies behind the ball, the simplicity sometimes is genius.

"You don't have space, you have to open spaces by playing simple, so it was a decision to play the kid, but Paul came on very, very well with a great attitude.

"With the spaces that we had at that time because we were winning 1-0, Paul could show his talents and his qualities.

"I always try to do what is best for the team in any moment. I prefer to look at it in the beautiful way of a little kid [McTominay] that arrived here with his mum at nine years old for the first training session.

"Ten or 11 years later, the kid is playing in a Manchester United shirt in an important match in the Premier League at home at Old Trafford, so I prefer to look at that perspective.

"Paul is a fantastic player, no doubt for me one of the most talented midfield players in the world, but to sit on the bench one day is not the end of the world."