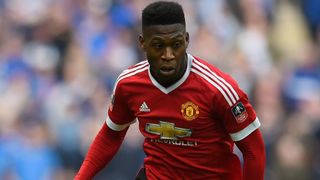 Jose Mourinho has claimed that Timothy Fosu-Mensah was only omitted from Manchester United's squad to face Galatasaray due to a minor injury concern.

Widespread reports on Thursday said the United boss had informed nine players, including veteran Bastian Schweinsteiger, that they will not be part of his plans for the coming season.

Netherlands youth international Fosu-Mensah was one of the players allegedly told they can find a new club, sparking huge discontent from United fans on social media, who see the 18-year-old as one of the brightest young talents at Old Trafford.

However, Mourinho says the versatile midfielder has been left out of the party travelling to Gothenburg for Saturday's game as a result of a small injury worry.

"Fosu-Mensah is not so much injured," Mourinho told MUTV. "But he has this little thing that we want to be careful with given that he is young. He is separate from the group until he is 100 per cent back."

Defender Chris Smalling was another absentee from the 23-man squad, with Mourinho confirming he has suffered a recurrence of problem picked up last season.

"Chris Smalling has had a recurrence of an old injury from the previous season," he said. "We shall see what happens, but already he is suspended for the first [Premier League] game against Bournemouth."

United suffered a humbling 4-1 defeat to Borussia Dortmund in their last match, before the scheduled clash with Manchester City in Beijing was called off due to concerns about the pitch.

Mourinho had his squad training again the day they landed after returning from China, and the former Chelsea boss has hailed their commitment to his worth ethic.

"The players have been fantastic in their attitude," he said. "We have done a number of double training sessions, but I am not worried about them being tired on Saturday as the reality is we have to work and are looking at the [Galatasaray] game as one more training session because the players need minutes - we will need to recover from that too."