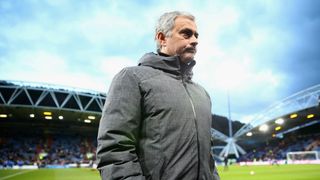 Jose Mourinho hopes a thinning Manchester United squad will be bolstered by the time Wednesday's Champions League tie with Sevilla comes around.

Their next assignment is a daunting trip to the Ramon Sanchez Pizjuan, but Mourinho hopes to have Ander Herrera, Marcus Rashford and Antonio Valencia back in contention - although Pogba's recovery remains shrouded in mystery.

"I didn't rest one single player, so we had every player available here," Mourinho told reporters at the John Smith's Stadium.

"I didn't rest anyone. I brought two kids that played yesterday 90 minutes because I don't have another player.

"Can we recover some of them to Wednesday? I believe so.

"I think Rashford, Herrera, Valencia... I think they have a chance. Paul, I don't know. Marcos Rojo, Phil Jones, Marouane [Fellaini], Zlatan [Ibrahimovic]... I don't think they have any chance.

"We arrive in this crucial moment with some problems, but I think mentality is very important. We have strong team ethics, strong team mentality. We know it's a very difficult match but we go for it."

United will tackle Brighton and Hove Albion in the FA Cup quarter-finals, a draw that Mourinho is satisfied with, while casting a wary glance towards a Seagulls side he expects will have little to lose.

"It was difficult for us, Brighton. We beat them at home [1-0 in November, but it was a] really, really difficult match.

"Imagine Brighton is one match to go to Wembley for the semi-final and they're doing well in the Premier League - I don't think they are too worried about relegation because they are doing really well.

"I prefer to play at Old Trafford against Chelsea or Manchester City or Tottenham."