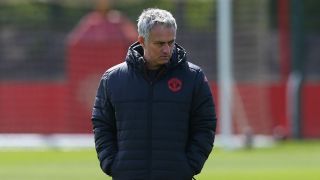 Jose Mourinho has no problem with resting players against Arsenal at the weekend if it will help Manchester United reach the Europa League final.

United take on Celta Vigo in the first leg of their final-four clash at Balaidos on Thursday and then face a trip to Emirates Stadium on Sunday for a match that could have huge ramifications in the race to qualify for the Champions League via the domestic route.

Mourinho's side sit fifth in the Premier League, one point behind local rivals Manchester City and five clear of Arsenal in sixth, though the Gunners have a game in hand.

But the Portuguese insists winning the Europa League is United's priority, with the competition arguably offering a more realistic route to a return to European football's top table.

"I know that it's the only competition that Manchester United as a club never won and it'd be great to close the circle and say we are a club that won every single competition in the football world," said Mourinho.

"Thinking about us as a team I think it would be a good achievement with as many problems as we've had and would allow us to be back to the Champions League next season.

"The Europa League becomes for us now more important and of course it depends on the result, the way we analyse the situation tomorrow [Thursday] after the match, but if we have to rest players next weekend, we are going to do that.

"If we play the final, the players who play it would not be selected for the Sunday before the final."

Celta have lost all three of their LaLiga matches since confirming their place in the semi-finals with a 4-3 aggregate wih over Genk, but Mourinho remains wary given the way Eduardo Berizzo has rotated his side mid-table in that time.

"That Celta managed to be in the semi-finals, it says everything," he said.

"Because of their situation in LaLiga, a comfortable situation, they manage to think just about the Europa League, to rest players, to be in the maximum of their condition so [it will be] a difficult match for us.

"They are here to win, they've played three league games with their second team. I think it's very clear they have come to win."