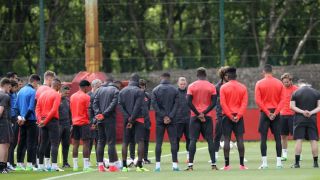 Manchester United manager Jose Mourinho has no doubt the local people will "pull together as one" after Monday's bomb attack in the city.

The blast at Manchester Arena killed 22 people and left 59 injured after a concert by American pop star Ariana Grande and is being treated as a terror attack by local police.

United face Ajax in the Europa League final in Stockholm on Wednesday and held a minute's silence ahead of their final training session before the match at their Carrington base.

Mourinho's squad will travel to Sweden later on Tuesday but have been allowed to forego their pre-match media duties in light of the incident, with UEFA accepting a request from the club.

However, Mourinho did address the bombing and his side's preparations against such a tragic backdrop in a short statement on United's official website.

"We are all very sad about the tragic events last night; we cannot take out of our minds and our hearts the victims and their families," he said.

"We have a job to do and we will fly to Sweden to do that job.  It is a pity we cannot fly with the happiness that we always have before a big game.

"I know, even during my short time here, that the people of Manchester will pull together as one."