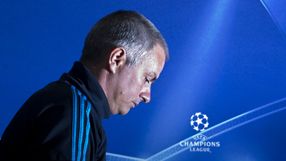 Mourinho's Chelsea were eliminated in the last four by Liverpool in 2005 and 2007 while Real were knocked out by their bitter rivals and eventual winners Barcelona last season, a reverse the Portuguese blamed on a UEFA conspiracy.

Nine-times European champions Real must overturn a 2-1 deficit from last week if they are to reach next month's final, also in Munich, and go into the game on a high after virtually wrapping up the Spanish title with a 2-1 win at Barca on Saturday.

Mourinho, who has refused to speak to the media before La Liga games in recent weeks but is obliged to appear ahead of European games by governing body UEFA, made his now habitual comments about what he sees as refereeing errors.

He also made an oblique reference to his claim that there is a UEFA conspiracy favouring Barca - which landed him in hot water last season.

"I have not had that much luck in semi-finals," Mourinho told a news conference on Tuesday. "I lost one [against Liverpool] when the ball did not cross the line - which was unbelievable.

"Another season [in 2007] I lost on penalties - which is more an issue of bad luck - and last season [against Barca] I lost the semi-final in a way that everyone knows about.

"This time I hope to win although we lost the first leg to a goal that was offside," added Mourinho who lifted the Champions League trophy with Porto in 2004 and Inter Milan in 2010.

"The referee was [generally] very good, he made a mistake but we all make mistakes, me too."

Real's home form this season suggests they are favourites to advance to the final against Barca or Chelsea.

The London club have the upper hand after winning last week's first leg 1-0 while the holders are smarting after suffering their first league defeat to Real in eight matches and seeing their Spanish title slip away.

Real have won 10 of their last 11 home games in the Champions League and have netted 22 goals in five outings at the Bernabeu in this year's competition.

They also have an impressive record against German visitors, winning 17 of 22 games and drawing three.

One possible dampener if Real make the final is that four players - Gonzalo Higuain, Xabi Alonso, Sergio Ramos and Fabio Coentrao - will be suspended if they earn another booking.

Mourinho said that was not an issue.

"Players cannot be selfish. The important thing is Madrid get to the final," he added. "I would accept not going to Munich and staying at home if the team got through.

"I hope the referee shows good sense and avoids handing out avoidable cards."