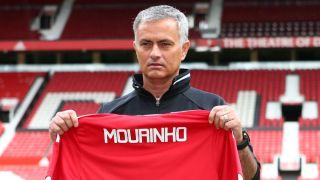 Jose Mourinho's targets for Manchester United will be "aggressive" in his debut campaign at Old Trafford.

The former Chelsea boss has started his three-year contract at United having replaced the sacked Louis van Gaal.

United have finished seventh, fourth and fifth in the Premier League since Alex Ferguson's retirement in 2013, but Mourinho is immediately setting the bar high.

He told adidas Front Row: "I am not humble when I talk about targets, I'm quite aggressive on that.

"I know that we are speaking about a hypothetical situation which is very difficult to reach but I want everything."

Mourinho called on United's supporters to show togetherness with him and his squad over his tenure as manager.

"There is no chance we will be happy if we are not together and I think the passion [they have] for this club is really amazing.

"We have brought a few new faces in, we will keep some others but, in the end, it doesn't matter who the manager is, who the new players are or who is staying or leaving, it's Man United and Man United is much more than any one of us.

"The passion the fans have is for the club and I feel that I am a club man.

"When I arrived, I wore the [United] shirt immediately and this is the kind of club and the kind of shirt that I am very proud to represent. I am going to do my best to be happy and to make the people happy."