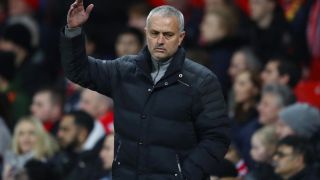 Manchester United manager Jose Mourinho has questioned the mentality of some of his players, calling for them to break out of their "comfort zone".

Despite a 14-match unbeaten run in the Premier League, three consecutive draws has left United sitting sixth in the table, four points back from the final Champions League qualification place.

Mourinho has been critical of members of his squad throughout the campaign, the Portuguese claiming they are taking longer than expected to adapt to his demands.

"I didn't know the players very well. I didn't know that some players need time to live with this, because it must be part of your natural habitat," he was quoted as saying in the UK media.

"Play to win, responsibility to win, cope with the pressure to win. This is something that has to belong to your natural habitat. For some guys, it doesn't.

"They also need that time to go out of their comfort zone or a zone where they are protected that we assume the objective is not to win, that also takes time."

Mourinho, whose team visit Leicester City in the league on Sunday, feels his own hunger for success has never changed, citing an expectation of continual improvement from himself and his players.

"Something in football that doesn't change, especially in my mentality, is the desire to win, the responsibility to win, the feeling that I'm never happy with myself, that I always want more from myself," Mourinho said.

"I don't accept anything that is good. You don't want good, you want very good.

"That is something I always fight for every day for the people that surround me - players, assistants, medical department, everybody."