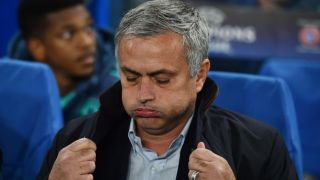 Jose Mourinho made the wrong decision in returning for a second stint at Chelsea, according to Alex Ferguson.

Mourinho has taken over at Manchester United after leaving Stamford Bridge before Christmas last season.

The Portuguese tactician was appointed again at Chelsea in mid-2013, leading the club to a Premier League title.

But it turned sour for Mourinho in London, departing in December last year after losing nine of 16 league games.

Ferguson, a friend of the former Real Madrid and Inter coach as well as a club ambassador at United, believes Mourinho should never have returned to Chelsea.

"I thought Jose was wrong to go back to Chelsea, I really do," the legendary former United boss told Sky Sports at a charity event.

"I think it's always difficult going back to somewhere for a second time.

"The ability, charisma and personality, his success is high, won a European Cup twice with different clubs, won a Europa [League] with Porto, winning titles with all the teams he's managed. His record - you can't ignore that.

"I think Manchester United is the right kind of club for him, I really do. I think we'll do well."

United finished fifth in the league last season, but Mourinho has already added Zlatan Ibrahimovic and Eric Bailly to his squad with further signings likely.