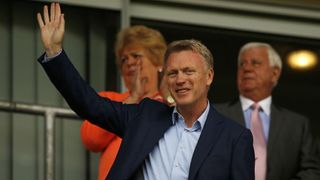 A plane carrying David Moyes and his Sunderland squad to Geneva had to make an emergency landing in Manchester on Sunday.

The Eastern Airways Flight was scheduled to fly from Newcastle to the Swiss city, but a fault with one of the engines caused a diversion to Manchester Airport.

Sunderland are heading out for a pre-season camp in Switzerland and France, with friendlies lined up against Stade Nyonnais, Dijon and Montpellier.

A statement from a Sunderland spokeswoman in the Sunderland Echo read: "There was a technical fault with the plane and we were diverted to Manchester.

"We have to wait for a new aircraft, but it's just a minor delay and hopefully we'll be in France soon."

A Manchester Airport statement added: "It was a flight carrying the Sunderland football team.

"They had set off from Newcastle earlier and the aircraft was showing a technical failure, so it was diverted to Manchester as a precaution.

"It landed safely and all passengers disembarked while safety checks were made."

Former Manchester United manager Moyes had been out of work since being sacked by LaLiga side Real Sociedad in November, but he signed a four-year deal on Saturday to replace new England manager Sam Allardyce at the Stadium of Light.

The Scot was in the stands as Sunderland defeated Rotherham United 2-1 at the New York Stadium on Saturday.