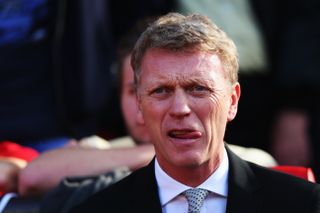 Giggs came off the bench to replace Marouane Fellaini in the 66th minute of United's 1-1 draw with Shakhtar Donetsk to become the competition's all-time record appearance maker, one ahead of Raul on 145 games.

And Moyes was full of praise for the midfielder following his milestone achievement.

Danny Welbeck had given United the lead in the 18th minute, before Taison's equaliser with 14 minutes remaining, and Moyes admitted that he had mixed feelings following the result.

"It is a good point," he said. "They have a great record against English teams and the team stood up well to it.

"We got a good goal early doors, and I thought we were going to stop them scoring, we defended very well."

The draw leaves United level with their hosts at the top of Group A with four points from two games, although Moyes was disappointed with his side's second-half showing.

"We said at half-time we needed to keep the ball better," he said.

"But we actually gave it away more in the second half so I'm a bit disappointed with that.

"Robin (van Persie) was unlucky with his chance, if we'd have got that we'd have seen it out easily, but we were really unlucky to lose a goal.

"The draw doesn't take us any further just now, we're going to have win games elsewhere."

Welbeck echoed the sentiments of his manager, praising the solidity of his team following Saturday's shock 2-1 home loss to West Brom.

"I think it was a decent result," he said.

"We made ourselves hard to beat and it was difficult for them to score, but towards the end they got that goal and that is the disappointing part.

"Four points from the first two games is okay, considering we were away at Shakhtar.

"We are a bit disappointed as we are Manchester United and want to win every game, but we have to be satisfied with a point."